Battery power is a big stress during most shoots! Without any universal standard, camera operators juggle different battery types, charger types, and workflow carousels back at the base. As cameras keep getting smaller, their batteries run out quicker: two of my favorites (the Blackmagic Pocket Cinema Camera, and the new Sony a7R II) basically demand a pocketful of spares to make it through an average shoot.

If you can afford to add a little weight onto your rig, and take a load off your mental stress, there are scalable solutions to choose from depending on your needs. This video walks you through what’s out there, and what’s new.

Starting with the Atomos Power Station, which comes in a Photo version (sort of misleading, because it’s really just a package with smaller batteries and only GH3/GH4 + a7x adapters), and also a Video version (larger batteries and more camera adapters), this video shows you what’s in the box, how it works, and how it can put your rig at ease. I should add here, as Atomos notes, that a key feature of the Power Station is its significantly faster charging time, when you connect the included AC adapter to its input, whenever batteries are hooked onto the Power Station.

If we keep adding more accessories to the rig, though, with more power-hungry gear, even the Power Station might not be enough (or last long enough). The next level up is V-mount. It’s always been priced for the “not-my-own-money” production world, but a new arrival to the scene called MAXOAK might be the current front-runner for combining affordability with high power, high quality, and extra features. Their new V-mount battery rated at 12,000 milliamp-hours (177 watt-hours) has an integrated push-button battery tester, D-Tap power port, and even a standard USB power port. That not only makes it the phattest cell phone charger on the street (not that you’d carry it around), but also adds versatility as we’re seeing USB 5-volt bus power become more common for camera gear. As this video mentions, the new a7R II takes bus power from its micro-USB port not just to charge the internal battery like its predecessors, but actually to power the entire camera. Other gear like the Tascam DR-60D and DR-70D audio recorder accept USB bus power too, even without batteries installed, and hopefully the industry will come around to making this a standard option. 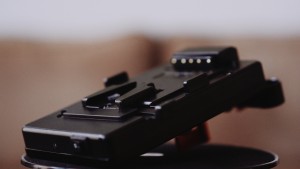 V-mount batteries are typically hooked right onto studio lights or big camcorders (particularly “ENG”-style shoulder-cams), including the recent Sony CineAlta line-up and the Blackmagic URSAs from Maxi to Mini. But big V-mount batteries like the MAXOAK can also slide onto battery adapters. This video highlights the CAME-TV VM02 V-mount Battery Plate (because it’s my favorite), but there are others just like it, including something from Tilta. As seen this video, you can mount it on standard 15mm rails, and a shoulder pad to counterbalance a rig, while it gives you multiple outlets at various voltages for all your devices that need power.

One thing I don’t mention in this video (a little off-topic) is just to remind you that there are airline restrictions on lithium batteries, depending on size and whether it’s carry-on or checked baggage. For travel to and from the United States, for example, that MAXOAK battery at 177 watt-hours is a no-go, given the maximum allowance of 160 watt-hours for both carry-on and checked baggage, as noted at this FAA PDF. Crazy fact: even those tiny batteries for your cameras have to be docked in your equipment for checked baggage, as loose spares aren’t allowed!

Anyway, that’s the point of this video: you want to be prepared for anything, and sometimes you need to travel light and carry light. Other times you can add a little weight and get some peace of mind. I hope this helps you figure it out! I know that it took me a while. Let me know what you think in comments below. Did I miss something?